At the end of the year, Incognito organizes its famous OMGWTFBBQ!! This is the last opportunity of the year where, together, we can look back on all the events that were organized, all the fun that we’ve had, all the gossips that we’ve heard, and all the funny stuff that were said throughout the year.
Unfortunately, some memories get lost on the way, and our fellow classmates who have been abroad for a whole semester or were not able to attend or great lectures/funny parties did not get the chance to experience all of this.

And this is the reason for why we, each year, create a yearbook in which you can relive the best moments of the year, leave a little word to your classmates, and laugh once more to all the things we’ve accomplished this year!
Our yearbooks are given out for free at the end of the year barbecue.

If you didn’t get the possibility to get a copy, you can still send us an email at incognito@maastrichtuniversity.nl, and we’ll see what we can do for you. Some editions of the previous years are still available! 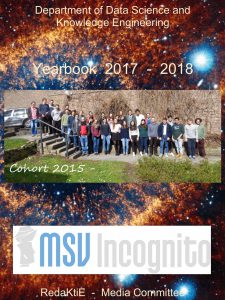