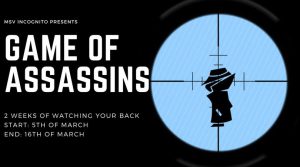 The Guild of Assassins is looking for new recruits to join their ranks. However, there is only one way to find out who is most worthy of this recognition: A massive game of sneaking, backstabbing and outright slaughter.

Incognito’s event committee, AKtiE, is running an assassination game from 5th of March until the 16th of March. Every registered player will be given a target who they will have to kill by stabbing this target in the back with a plastic knife provided by us, thus proving that they are worthy of their spot in the guild. However, if you yourself get killed, you are out of the game and are not able to join back in. The winner of the game will be the last recruit standing or, in the case that by the deadline multiple people have avoided death’s grasp, the player still alive with the highest kill count will take the trophy.

To synchronise our events with your calendar, you can add this ICAL link to your favourite calendar software!