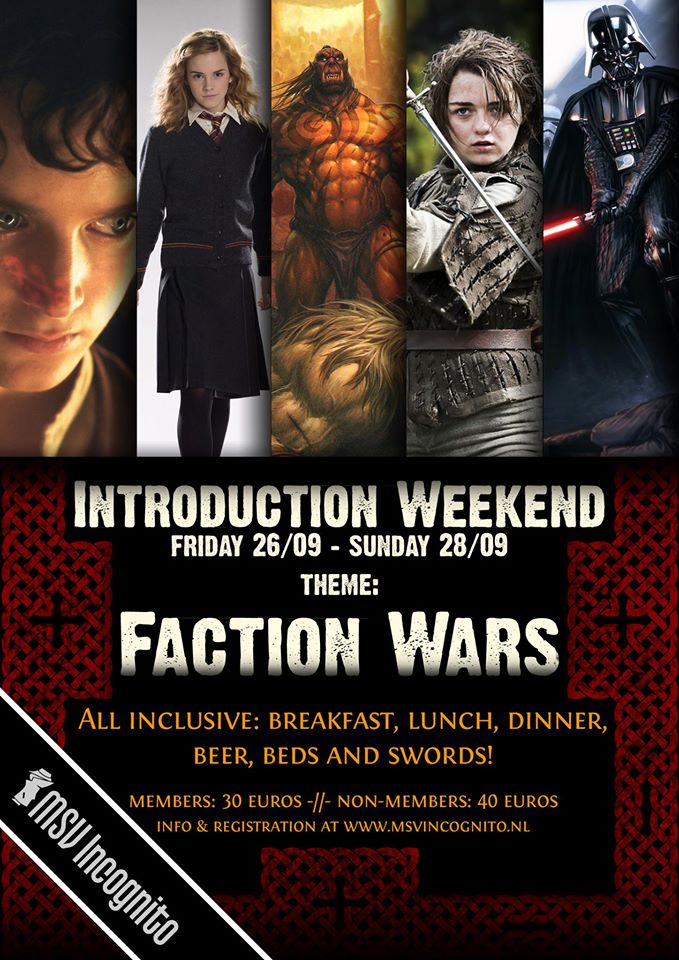 At the end of September, Incognito will have this year’s Introduction Weekend! From Friday the 26th of September until Sunday the 28th of September, we will spend a weekend in a land far far away to get to know each other a little bit better and hopefully make a lot of bff’s 😀

This year, we have an awesome theme connected to it: Faction Wars! This means that you will be able to fight for your faction and earn valor and recognition.

The different universes that factions competing in Faction Wars will be from are:
-The Lord of the Rings
-Harry Potter
-World of Warcraft
-A Song of Ice and Fire
-Star Wars

Don’t worry about the entire weekend being full of role-playing, though; this is just the theme we decided to set the camp up with. The goal of the camp is to get to know each other and have fun! In this same spirit, there will also be no strange initiation rituals!

The price for this weekend is 30 euro for Incognito Members and 40 for non-Incognito members. You will be able to register for the weekend by going to http://www.msvincognito.nl/incognito/introweekend/ and filling out the form.

We still need cars to be able to get to the weekend! If you have a car and/or a driver’s license, let us know! Transportation costs will of course be covered by Incognito.

To synchronise our events with your calendar, you can add this ICAL link to your favourite calendar software!